REVIEW: Murder on the Mullet Express

**I voluntarily read an Advance Readers Copy of this book from Mystery & Horror LLC via NetGalley. Opinions expressed in this review are entirely my own.** 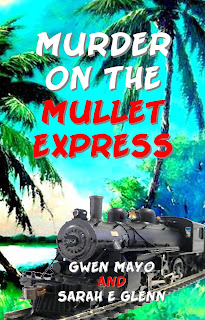 In 1926, a drive south to Florida with their elderly uncle turns deadly for former war nurses Cornelia and Teddy. Both women learned how to take care of themselves during WWI. Cornelia never travels without a sidearm and Teddy knows showing a bit of leg can get them out of a jam quickly, even if her hair has gone to grey. Travelling to look into buying land from a development company so their uncle can live in the warmer Florida climate, their car breaks down on a lonely stretch of the Dixie Highway, and they end up having to catch the local train, The Mullet Express, to get to their destination. They are barely chugging along again before a fellow passenger is murdered with poison, and a second corpse is discovered stashed in ice with mullet fish.

I enjoyed this book! Gun-toting Cornelia and tippler Teddy are such fun characters. The cantankerous uncle with his love of steam engines and movie cameras is a hoot as well. Surround these plucky folks with land speculators, nefarious dealings and murder and the end result is an engaging, quirky mystery! Murder on the Mullet Express is a fun, quick read with plenty of suspects, twists and turns. It seems like their trip to re-locate their uncle is destined to be one fiasco after another, but the girls take it in stride, as they learned during the war. The backdrop of 1920s Florida gives great color to the story, painting a picture of fast development, desperate land speculators, and all the crime and greed that comes with them.

Murder on the Mullet Express will release January 16th by Mystery and Horror, LLC, an independent publisher.

Gwen Mayo is the author of the Nessa Donnelly Mystery series and several other novels. Sarah E. Glenn has also penned several novels including Strangely Funny and History and Horror, Oh My! Check out their websites at: www.saraheglenn.blogspot.com and http://www.gwenmayo.com
Posted by Juli Wyant at 11:00 AM