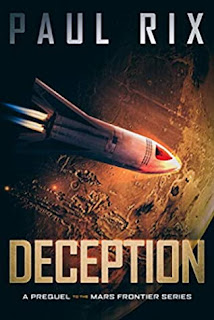 I definitely enjoy an exciting Sci-Fi story. And it's even better when I discover a "new-to-me" author at the same time! The cover art and theme of this prequel novella is what first drew me to this Mars colonization story at first...and then the story sucked me right in.

The basics: The crew of the Falcon has been travelling through space for four months heading to Mars. It's a historic mission -- the first crewed mission to Mars that will land and then return to Earth. The crew is skilled and up for the challenge, and NASA is doing their part on Earth to make the mission a success. But, a last minute discovery of possible problems with the Falcon's computer systems might mean aborting the mission short of its goal.

This story pulled me in quickly. I love the basic premise -- a manned mission to Mars facing challenges that no other humans before them have faced. I like the characters. All of them face stress, pressure and extreme conditions (4 months floating in space, the stress of keeping a ship functioning and preparing to land on another planet, troubleshooting a serious problem mid-flight, etc), and all react differently. And the suspense and action are great! In my life time, I have seen space missions succeed, and I've seen missions fail horribly. I was one of many students who sat at school in 1986 watching a television screen ready for a day of space-themed class lessons when the space shuttle Challenger exploded after take-off. One minute we were excited for a teacher to be in space -- and the next we were utterly shocked. Even with top notch training, there is never any guarantee that a space mission will safely succeed. So many variables. And a completely inhospitable environment outside the ship. Think about how much pressure and stress just those concerns cause a human crew.... I think that's why I love sci-fi stories set in space so much. Humans pushed to the absolute limits of life itself....and what happens when fate pushes just that little bit extra. Survival or death -- it all hangs in the balance.

Great story! I like Paul Rix's writing style and characters. And, he had some surprises in store. Very enjoyable short prequel! Deception is the into for the Mars Frontier series. Can't wait to find out what happens next!

Posted by Juli Wyant at 2:04 AM No comments:

REVIEW: As the Crow Flies 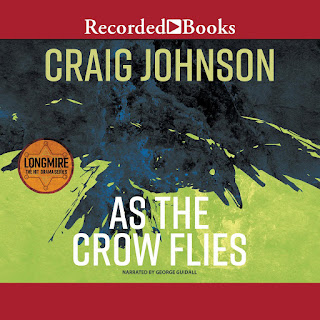 Wyoming Sheriff Walt Longmire is in a pickle. His daughter has her heart set on a wedding site on the Cheyenne Reservation, but there is a last minute conflict that arises. And while he and Henry Standing Bear are trying to unravel the snag in plans, they see a woman fall from a nearby cliff. Suddenly Longmire isn't just trying to save a wedding, but also helping the local police chief investigate the case.

As the Crow Flies is the 8th book in the Walt Longmire series. These books just keep getting better and better. I love the setting, the characters and the plots. I listen to the audio books. George Guidell is a perfect narrator for these stories. Always a great listening experience!

I'm savoring this series. I listen to one book....then take a break for awhile....then listen to more. I don't want to reach the end! I'm still sad the TV show is done. I'm really taking my time with this series and enjoying each book and short story.

I loved the side plot about Cady's wedding. Both Longmire and Henry Standing Bear love Cady. And they really work hard to get her wedding problem fixed. In the end, it's a group effort. The investigation this time was really interesting and complex. It definitely kept my attention from start to finish.

Another awesome book in this series. I'm going to wait a bit and then jump into book 9 -- A Serpent's Tooth. There are couple novellas in between -- Christmas in Absaroka County and Messenger. I have both in ebook format. I'll read those before the 9th novel. :)

One of my favorite book series!

Posted by Juli Wyant at 1:19 PM No comments: 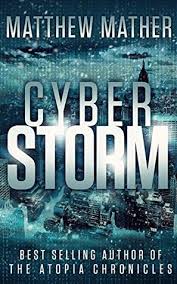 Mike Mitchell and his wife live in New York with their young son, Luke. They are battling modern problems -- stresses of city life, his wife wanting to return to work, the joys and fears of parenthood -- when things go horribly wrong. A cyber attack shuts things down. Everything. Power, water, the internet. Gone. And then the snow starts falling. NYC quickly becomes a disaster area with everyone struggling to survive.

I listened to the audio version of this book. A very engaging and enjoyable listen. I learned during 2020 that upsetting the usual supply chain in any way can cause people to behave badly pretty quickly. I witnessed people panic buying and going into crazed angry rants when informed there were buying limits. People have been beaten and even killed over disagreements about wearing or not wearing masks in public. I saw people come to blows over toilet paper. And I read many reports about senior citizens being targeted by scams and worse. And -- our utilities, basic supply chains for medicines, food and water and the internet were never interrupted. Imagine how people's behavior would slide if the lights went out, running water shut off, no garbage pickup, no gasoline available, no food in the stores, no fire department, no police patrolling......    Can you imagine?

I was totally engaged in this story until the end. I felt let down by the ending.....too easy, felt contrived. I enjoyed it.....but it was just like tying things all up in a pretty bow at the end. I guess that's better than ending on a totally bleak horrific turn of events....but the ending just felt a bit Hollywood.

Enjoyable disaster story. Definitely had me thinking over 2020 and contemplating how we behave during disasters. All the issues that have come up during Covid19....how much worse would it be if something worse came along that left people starving and panicked? Things would get very bad in just a few days.

I listened to the audio version of this book. Narrated by Tom Taylorson, the audio was a bit over 11 hours long. Taylorson reads at a nice pace and has a pleasant voice. He did a good job of voice acting. Very enjoyable listen.

I'm definitely going to read more by this author. Even with my disappointment in the ending, I really liked this book. 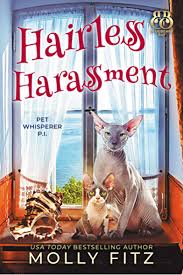 Trouble seems to be following Angie Russo and her cat companion, Octo-Cat, as they move into their new house. The neighbor, a senator with outspoken views on the environment, is found dead in her house. Although local authorities rule the death an accident, Angie and Octo-Cat are on the case -- there's just something strange about the situation. Angie needs to talk to the senator's two cats, but that proves harder than expected. The two hairless kitties only speak in riddles.

Fun story! Angie is becoming a great amateur sleuth, and Octo-Cat is wonderfully snarky. The plot kept my attention, and the ending was great!

I listened to the audio book version of this 3rd book in the Pet Whisperer P.I. series (Tantor Audio). Narrated by Ann Richardson, the audio is about 3 hours long. Richardson does a great job of narrating. Her voice is pleasant and she reads at a nice pace. I like how she voices the characters -- even the pets! All in all, a very entertaining listening experience.

I love the humor and the characters in this series. Octo-Cat is spoiled. Angie is capable, but sometimes a bit rattled by her new found ability to talk to animals. Nan is so supportive and awesome. Heck, even Angie's mother (the reporter) is growing on me. Always a fun story!

On to the next book in the series -- Dog-Eared Delinquent! 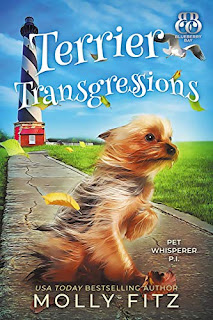 Angie Russo is still struggling to get used to her new talent -- talking to animals. After being zapped by an old coffee maker in book one, she awoke with her new, and often very confusing and embarrassing, gift. Her new sidekick, Octo-Cat, is snarky and spoiled, but they do make a great sleuthing duo!

Terrier Transgressions is the second book in the Pet Whisperer P.I. series. Someone discovers Angie's little secret, and blackmails her into getting involved in a murder investigation. She and Octo-Cat have to talk to the murder victims' little terrier dog to glean clues, before an innocent man is sent to prison.

Fun story! This second book was just as entertaining and filled with humor and amateur sleuthing as the first book! I listened to the audio book (Tantor Audio) version of this story. Narrated by Ann Richardson, the audio is about 4 hours long -- easy listening length. Richardson does a great job of voice acting. She has a pleasant voice and reads at a nice pace. All in all, an entertaining listening experience!

I love the book covers for this series! So cute and eye-catching! The stories are easy reading length...not too short, not too long. Just right! I like the characters, the basic premise and the plots. Just fun, entertaining reads!

On to the next book -- Hairless Harrassment! 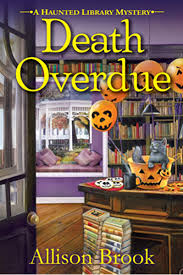 I read a review copy of this book when it first came out in 2018. I decided to revisit this series from the beginning, as I lost track of it and new books have been added. I listened to the audio book version - very enjoyable listen!

I love cozy mysteries with a ghost or Halloween theme, so this series is a perfect autumn read for me. The ghost is not scary, and the situations are not horrific (well, except for the murder of course). Just a fun read with a nice mix of humor, amateur sleuthing and mystery. I love libraries....and a haunted would be even better! I wonder how many libraries in the world are considered haunted? All those people....all those books that have been read over and over by so many....old buildings.....   I bet there are a lot of haunted libraries!

Posted by Juli Wyant at 3:07 AM No comments: 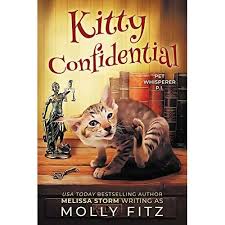 The cute cover immediately drew my attention to this first book in this cozy mystery series from Molly Fitz. I'm a sucker for cozy covers that feature cats! Then I was completely taken in by the idea of an amateur sleuth that can talk to animals. Fun! :)

The basics: Angie Russo is rethinking her life choices when a near death experience changes her life....a quick zap and suddenly she can talk to animals and somehow promised to help a cat find his owner's killer. Definitely never a dull moment!

This book was light-hearted, fun entertainment from start to finish. The story is a nice mix of cozy murder mystery and humor. Angie Russo is an intelligent and slightly zany main character. Octo-cat is snarky, opinionated and spoiled -- as any cat (but much more). The plot kept my attention from start to finish.

I listened to the audio book version. Narrated by Ann Richardson, the audio is just over four hours long. Richardson does a great job narrating. She has a pleasant voice, brings the characters to life, and reads at a nice pace. All in all, a very entertaining listening experience!

I'm definitely going to continue reading this series! This was the first book by Molly Fitz that I have read....and I enjoyed it enough to read all her books!