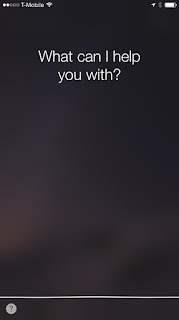 Two years ago as a prank my son borrowed my phone and instructed Siri to call me "Idiot." The next day while driving, I asked Siri to send a text for me. Her voice calmly said "I have sent the text to Billy, Idiot'' I called my husband and we both agreed it was the funniest prank Josh had pulled so far. We had a good laugh and then I switched Siri back to using my name. No big deal.

But, even after all this time, periodically Siri reverts to calling me Idiot.

Today out of the blue, she popped back to old habits. I asked her to turn a timer on for me, and Siri said in her familiar monotone, "Ok, Idiot, I have set the timer for 10 minutes.''

After chuckling about the return of my nickname, I tried to switch it back. Here is how the conversation went:

"Ok Hoolie. Thanks for letting me know."

I hit the cancel button at this point.

"Ok. I will continue to call you Idiot."

I don't know which is worse. I could continue to let my phone call me an idiot or decide that Hoolie or Goolie is a perfectly acceptable variation of my name.

I'm surprised that suddenly Siri seems to have lost the ability to pronounce a J. I think she's mocking me.

I accidentally dropped my phone on the next try, getting very close to a complete melt-down when Siri then asked to confirm my new name as "Damn it.'' At that point I gave up.

My son took over and tried several times to fix the problem. Unfortunately, all he could get was Hoolie, Goolie, and a new variation, Doolie.

So, he made another choice.