**I received a copy of this novel as part of a horror anthology, Modern Magic, from Falstaff Books via NetGalley in return for an honest, fair review.** 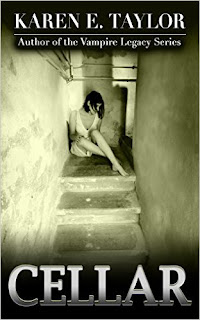 Laura Wagner notices some strange things about her new house in Woodland Heights. Phantom hands grabbing her in the cellar. Voices urging her that she would be better off dead. Weird sounds interrupting her phone calls. Disturbing nightmares about her children. A recovering alcoholic and prescription drug addict, Laura thinks the voices and strange things she sees in her house are just hallucinations brought on by getting clean during a month's stay in rehab. But soon she realizes that there is more to what's happening to her than just her body recovering from chemical and alcohol abuse.

This story, masterfully written by Karen Taylor, is incredibly creepy. It builds slowly, delving into the personal demons plaguing Laura Wagner -- her divorce, alcohol, valium, past mistakes, losing custody of her children. Her nightmares, hallucinations and suicidal thoughts seem to be part of her addiction recovery, but slowly morphs from hallucination to haunting. Culminating in a wonderfully creepy surprise ending, this novel is a must-read for supernatural horror lovers!

I was caught up in this story from chapter 1. At first I was pulled in by concern for the main character, but the creepy factor of this story snuck up behind me, catching me by surprise. The pacing was perfect. The creepy-stuff-happens-in-the-basement plot has been used before, but Taylor makes it her own, adding a new spin on an old storyline.

All in all, a great horror novel!!

Cellar is a re-issue of Taylor's earlier novel, Twelve Steps from Darkness. The author says the story is basically the same, but has been edited and expanded, adding new scenes and an epilogue.

Learn more about this book and Karen E. Taylor on her website:  www.karenetaylor.com
Posted by Juli Wyant at 5:22 PM