**I received a copy of this upcoming book from Random House/Alibi via NetGalley in exchange for a fair, honest review** 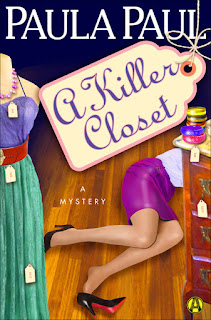 Irene Seligman is a successful assistant district attorney in Manhattan. She enjoys her Brooklyn apartment and city life. But then her elderly mother's sixth husband dies unexpectedly, leaving her mother destitute and exceedingly needy. Seligman is guilted into moving back to Santa Fe to help her mother. She loves the old, run-down home she grew up in, but knows they will have to have a substantial, reliable source of income to be able to afford to live. She decides to open up a used high-fashion clothing boutique because she isn't licensed to practice law in New Mexico. With the help of her mother's knowledge of high fashion, Irene prepares to open Irene's Closet: A Second Look at Haute Couture. Just two hours away from the shop's grand-opening,  Irene discovers a dead woman in the store's storage room. The woman is dressed in a $4,000 Prada outfit, but the look is not well-accessorized by the bullet hole in her head. The dead woman was one of her mother's friends, so Irene starts asking questions. Following a threatening phone call ordering her to stop her investigation, the body of another Santa Fe socialite is discovered in Irene's shop. Fearing for her mother's safety and the reputation of her new business, Irene knows she must discover the identity of the killer quickly before anyone else dies.

I had a bit of trouble getting "into'' this story because I was just shocked that a prosperous Manhattan prosecuting attorney would leave her job to go back to Santa Fe just because her 70-year old mother gave her a guilt trip. I just kept thinking that the more common sense solution would have been to help her mother financially, not drop her job and relocate back to New Mexico to live with her elderly mother.  And, at times, the main character did not behave like someone who is familiar with criminal cases, suspects and police procedure, as an assistant DA would be. At one point when she is brought in for questioning about the first body discovered in her shop, Irene keeps yelling that she wants an attorney, to the irritation of the officers driving her to the station. I don't believe an assistant DA from Manhattan would have handled the situation that abysmally. But....those two annoyances did not harm my enjoyment of the story all that much. The mystery portion of the plot was well-written and engaging. There were plenty of suspects and interesting angles to the investigation. As in most cozy mysteries, Irene goes about sleuthing without thinking about the danger she might be in, or any thought at all about whether she is hampering the official police investigation or not. At one point, she is threatened with a gun but still continues to investigate without calling the police or informing them of the situation. It's pretty formula in cozy mysteries for the main character to jump in and investigate as if they have more knowledge or expertise than the local police --- but, it is a bit more serious when guns are being drawn, right? I was able to read past that as well, as we all know that in a cozy mystery the main character is not going to be shot in the face, even if she is dancing all around the murderer urging them to do it. There were some great plot twists and interesting developments that kept the pace moving throughout this book. It kept me guessing up to the end!

So, despite some formula plot aspects, this was an enjoyable, suspenseful cozy mystery! I will definitely be reading more by Paula Paul! She is also the author of the Dr Alexandra Gladstone mystery series. There are five books in that series so far.

A Killer Closet releases October 11th from Random House/Alibi.  I highly recommend it for all cozy mystery fans, especially those who love the Santa Fe area and high fashion!

For more information on the author and her books, check out her website: www.paulapaul.net