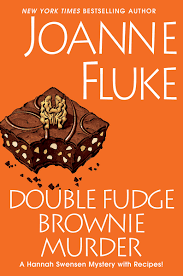 Ever got what you asked for......and then didn't want it anymore?

For the last several books in the Hannah Swensen series I have been eye-rolling and wishing that Hannah would make up her mind and finally choose between her two boyfriends. Well, in Double Fudge Brownie Murder she does finally make up her mind. But.....her choice seems to be incredibly un-Hannah-like. In fact, Hannah doesn't act like herself for this entire book. As I was reading, I kept thinking that something seems different about this book....Hannah is snarky and quick to offense. The stand-offish "I must be absolutely sure before I make a decision about my love life'' woman makes a huge decision in too short a time. And the whole thing just seemed......off. Not to mention an entire huge plot point that took up the entirety of the previous book, Blackberry Pie Murder, just sort of evaporated. Poof. Gone. Replaced by a rather lame murder mystery that seemed dropped into the hole created by the sudden disappearance of a major plot point.

So yeah.....it's a double edged sword. She made up her mind....but I'm left wondering WTF.

The basics: Hannah goes to Las Vegas for her mother's wedding. Then when she gets back to Lake Eden to face her vehicular homicide trial. But before anything can happen with the court case, the judge is murdered. The gang gathers as usual to help find who killed Judge Colfax.

Hannah does not act like an adult in this book. She hides information from both Mike and Norman just to save herself a confrontation. After 17 books, she does a complete about face and makes a huge decision following a single weekend in Las Vegas. She oversleeps every morning and her sister and business partner end up doing most of the prep work at the bakery.

Now, I will admit that I am glad that she has finally made up her mind. I'm glad Hannah seems to be on her way to behaving a little bit like a 30-something year old woman regarding sex, relationships, love, etc.  But I am unimpressed with the continuation of her inability to be truthful and honest with men, and her penchant for stringing along nice guys so that she doesn't have to have difficult conversations.

The writing also seemed off in this one. A huge plot point suddenly gone with a ridiculous explanation. The main character totally doing an abrupt personality change and suddenly becoming swooningly romantic when she has never been that way before. A murder being neatly plopped into the plot about 1/3 of the way through the book like an after thought. It felt like "oh yeah...this is a murder mystery so better kill somebody, and hey....we can get rid of this massive plot problem at the same time.'' And why did an 8 year old child have to explain to Hannah how to use a smart phone?? For heaven's sake, she's 30-something, not 85. And the child, Tracey, doesn't talk like any 8 year old I have ever encountered. She speaks like an adult. And a stuffy adult at that. No 8 year old is going to use the language this little girl was using, not even one raised around very intelligent adults.

I wish I could say I liked this book. But I didn't. For me, it was a dud. I am still a Hannah fan.....I have the other three books in the series and I'm going to read them. I've invested a lot of time in reading 18 books now....not going to stop. But, I sincerely hope that Wedding Cake Murder is much, much better than Double Fudge Brownie Murder. But, if I get to book 21 and the writing hasn't improved......I'm going to have to wave goodbye to Hannah Swensen.

Maybe it's like television series that go on a season too long?? Maybe it's time for Hannah to have a final book and be finished with it.

I'm keeping an open mind....and moving on to the next book.
Posted by Juli Wyant at 6:00 AM