REVIEW: Fantastic Beasts and Where to Find Them

Fantastic Beasts and Where to Find Them: The Original Screenplay
Author: JK Rowling 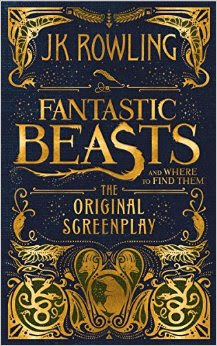 Unfortunately I missed seeing the movie Fantastic Beasts and Where to Find Them while it was still in theaters. After enjoying the recent book, Harry Potter and the Cursed Child which was in script form, I decided that I would read the recently released original screenplay of Fantastic Beasts. I figured it would tide me over until I can purchase the movie on DVD in March.

I absolutely LOVED this book! I didn't care that it was in screenplay format....it was still so much fun to read! I can't wait to see the film!

Newt Scamander and his collection of magical creatures come to New York, where Newt plans to purchase another creature to add to his collection. But, unfortunately his creatures escape from the case he keeps them in. Chaos ensues. With the help of a couple witches and a muggle (called a No-Maj in the United States), he tries to elude the local Magic Authorities and capture his escaped creatures. The story is a prequel to Harry Potter and is set in the 1920s.

Newt really is a sweet man. He loves all of his magical creatures, and really does try to do the right thing. The supporting characters are all awesome as well. The film doesn't release until March 28th but I'm glad I got to read the story!

The only thing that really bothers me is I don't like the term No-Maj at all. Bleck. Yeah yeah yeah....I know some terms are always different between here in the states and the UK...but No-Maj? Really?? Yuck. Sounds like some sort of paste floor cleaner.

I hope that more stories are forthcoming about Magic and the Wizards school on this side of the pond. That would be an awesome continuation of the Harry Potter universe. I feel like I just got an awesome Harry Potter fix, and the DVD is on preorder!

I definitely recommend this to all Harry Potter fans, even those who don't normally read screenplays or who saw the movie when it came out. I checked out a digital copy from my local library,but I'm definitely going to be purchasing a nice hardback copy of this for my keeper shelf. Delightful read!