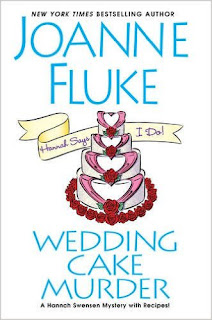 Wedding Cake Murder is book #19 in the Hannah Swensen Mystery series. After not really liking book #18, Double Fudge Brownie Murder, I was pleasantly surprised by this book. The writing was better. The characters were back to their usual behavior for the most part, and the plot was well-structured and more interesting.

Hannah Swensen is gearing up not only for her wedding but also for the Food Channel's Dessert Chef Contest. Hannah has a bit of stage fright in the first round of the competition, but still manages to win so the entire production comes to Lake Eden for the rest of the contest. She is hoping to really wow the head judge, Alain Duquesne, but it turns out that won't be an issue. Hannah's sister discovers the difficult judge stabbed to death inside a walk-in cooler. So, family and friends gather around Hannah to help her complete the contest and investigate Duquesne's murder.

Just as with every other Hannah Swensen book, Wedding Cake Murder has a lot of fluff. But...this is a cozy mystery and it's supposed to be a light read with fluff. There are lots of yummy recipes and quite a bit of subplot....Hannah's wedding, the cooking contest, and Hannah's personal relationships with her friends and family. I didn't like the last book because I felt like the characters were just off....not behaving like they had for 17 previous books. And the writing and plot just weren't Joanne Fluke's usual style, in my opinion. But...now that I really think about it, Double Fudge Brownie Murder dealt with a major subplot issue that had been a long time coming. And it was a surprise. I think it was a tough book to write after so many years of the characters acting in certain ways. (I'm not going to throw out any spoilers). Wedding Cake Murder finishes out some new plot points and paves the way for the series to head in a new direction. Bravo!! Finally!!

This book is sweet and back on track, as far as I'm concerned. The mystery was light, cozy fare, which is what I like about the Hannah Swensen series. And, all is wrapped up nicely just before it's time for Hannah to be married. :)

Just two more books to go! Christmas Caramel Murder is next, and then Banana Cream Pie Murder, which will be released February 28th. I've had a review copy awaiting my arrival at the end of the series....I can't wait to read it!!
Posted by Juli Wyant at 6:00 AM